Social media activist Alistar Nyamarari Chibanda who recently claimed that Nyaradzo Funeral Services group was profiteering at the expense of its clients has apologised to the end-of-life company and deleted his controversial posts on Twitter posts.

Chibanda on Tuesday used his Twitter page to apologise to Nyaradzo saying he had been misled by people who came to his inbox accusing the company of various misdemeanours.

We regret there are people who invaded my inbox with comments against Nyaradzo Group with unfounded malicious allegations of business malpractices that are not factual.

I have gone through the tweets and l realised that the comments I made were factually incorrect and defaming.

I did not intend to tarnish or damage the CEO’s good name, or the good name of Nyaradzo Group company.

I would like to sincerely apologise for my actions and the tweets have since been removed from my Twitter handle. 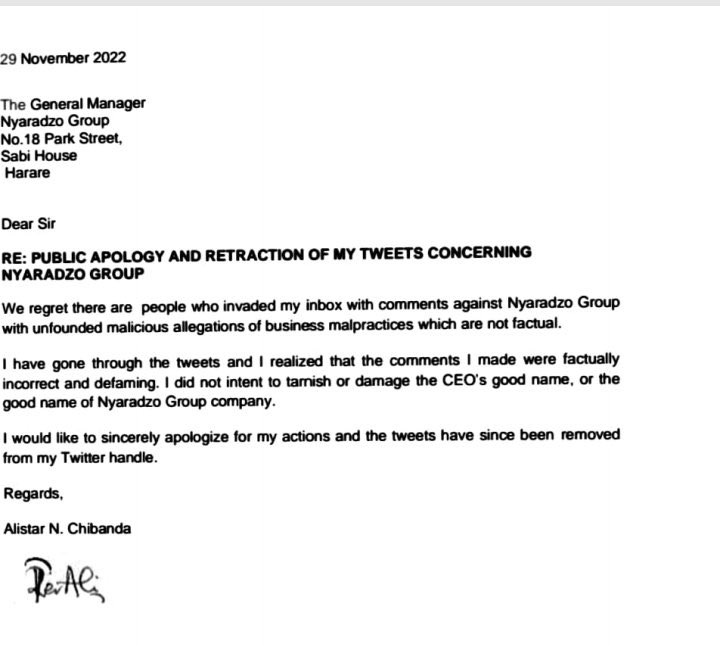 Among the accusations made against Nyaradzo, were claims that the company’s funeral policies did not mature while policyholders were also not getting any cashback as per policy terms.

This ignited debate on social media platforms and the Insurance and Pensions Commission (IPEC) eventually got involved and pledged to engage funeral assurers over the issues that were raised.

Early this month, one Farai Paruwani apologised to Nyaradzo after he had claimed that the company had rejected a claim on his policy following the death of his son.

He alleged that he was paying US$19.80 per month for 15 years but only defaulted 3 months within which his son died. He said Nyaradzo refused to bury his son.

Nyaradzo then got in touch with Paruwani requesting that he furnishes them with evidence supporting his claims.

Paruwani apologised to the company, saying said he had made an error.

Everything You Need To Know About ‘Ashleigh Moyo’ Shashl

She is the daughter of former Health minister Obadiah Moyo.[1] She has a sister named Sherris.

In 2019, Shashl was reportedly assaulted by Godfrey Utsiwegota at Pablo’s Night Club. Utsiwegota was not…continue reading

Ford Ranger hit by a train in Bindura

Drug Dealers In Court, Found In Possession of Crystal Meth!

RBZ: 70% Of Domestic Expenditure Is In US Dollars